Last Updated on October 28, 2022 by Guillermina

We all know how powerful and energetic huskies are, but are huskies considered large breed dogs? Do these muscular animals stand tall enough to fit into the large breed category, or are they too small? Let’s find out!

When you meet a husky for the first time, you will be impressed by the size of these beautiful dogs. They have a large physical presence that can make them seem quite intimidating until you get to know them! But are huskies considered large breed dogs, or are they too small?

The size categories of dogs are normally split into small, medium, and large, although some breeds have further subcategories within these groups:

As you can see, the size category of a dog goes on the average weight rather than the height of a breed. This means a tall but lightweight dog could be in a lower weight group than a short but muscular dog.

Read more about Can A Husky Eat Eggs? The Ultimate Guide! 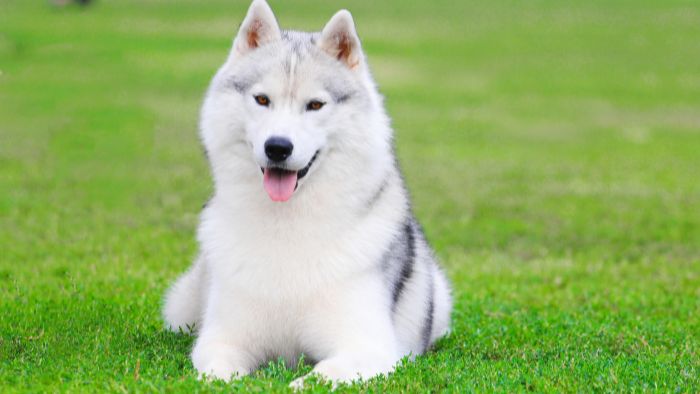 The average weight of a Siberian husky is relatively low when you take into consideration the height of the dog. At up to 23.5 inches tall, they stand at the same height as many large breed dogs.

However, these dogs are lithe and lightweight, designed for speed and athleticism. Think of them like elite sprinters – they have very little body fat, and a very efficient musculoskeletal system.

This leads to the Siberian husky have a very low body weight. Females weigh in at between 35 and 50 pounds, and males are 45 to 60 pounds.

This puts the Siberian husky firmly in the medium dog breed category, no matter how tall they are! This can seem quite odd when you think that they are grouped with far smaller breeds such as the English Cocker Spaniel and the short, stocky Bulldog.

How Big Can Huskies Get?

A problem that many husky owners have is that these dogs tend to lose weight easily. They use huge amounts of energy and like to exercise for several hours each day. Without sufficient nutrition, your husky can easily become underweight.

These dogs use energy not only physically, but also through their alert and vigilant nature. Some huskies can be quite nervous and suffer from stress, which can affect their appetite. The biggest Siberian huskies weigh in at around 60 pounds, but most weigh far less than this. It is a good idea to regularly assess the body condition of your husky, as weight loss can be difficult to spot under that dense, fluffy coat.

Weigh your dog every couple of weeks, and have a good feel of its body to check that it does not feel too bony and thin. Most huskies naturally have a slim waist, but the ribs should not be visible under the fur. You should be able to easily feel the ribs when gentle pressure is applied, but there should not be a layer of fat over them.

If you are worried that your husky is underweight, it is a good idea to seek the advice of your veterinarian. They will be able to check for underlying health problems and recommend a good diet to help your dog put on weight. It may also be necessary to cut down on your dogs exercise until it starts to gain weight.

On the other hand, some huskies may become overweight, particularly if their energy levels lessen later in life. You may need to switch to a less calorific food that is designed for dogs with lower energy needs. Try and keep your husky as active as possible, even during the geriatric years, to help prevent weight gain.

What Is The Largest Husky Breed? Although the Siberian husky is the only husky you will find in many dog breed registries, the word husky is also used to describe many other dog breeds originating from the polar regions.

The most famous big husky breed is the mighty Alaskan Malamute. The males of this breed can weigh up to 85 pounds and stand 25 inches high. This is slightly taller than the Siberian husky, but almost twice the body weight!

These strong powerful dogs are the draft horses of the canine world – they were used to haul heavy sleds slowly for many hours at a time, unlike the lightweight, fast sleds pulled by smaller sled dogs. The Alaskan Malamute is directly descended from dogs brought by the first hunters to venture into America in the Paleolithic era.

So, if you want a large dog breed that has husky origins, the Alaskan Malamute may be the one for you!

So, as we have learned, although huskies seem like very big dogs they are actually considered to be a medium dog breed! There are many husky-type dogs of all different shapes and sizes, and the Siberian husky is the most well known and also one of the smallest. The largest husky-type dog is the Alaskan Malamute, which can be almost twice the weight of a Siberian husky.

We’d love to hear your thoughts on are huskies considered large breed dogs! Are you a big fan of these hardworking sled dogs and their impressive strength? Or perhaps you’re struggling to work out if your husky is the right body weight or not? Leave a comment below and we will get back to you!