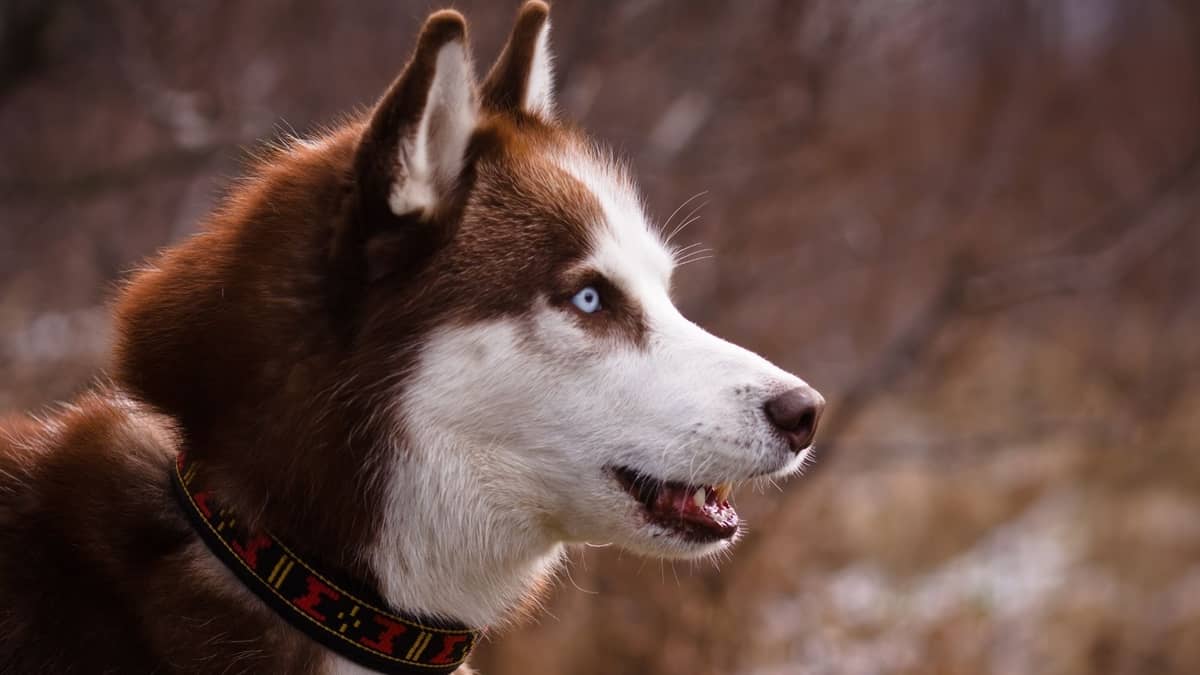 Do you have a new husky in the family who happens to be male, and has red fur? Then you will be in need of a list of male red husky names. Keep reading to discover 20 cool husky dog names for your red boy!

The star sign Aries takes its name from the Greek god of war. And whilst we would never want your husky to have a war-like temperament, this name still makes a lot of sense for a male husky because Aries is ruled over by the planet Mars, which is also called the ‘red planet’ due to the rust in its soil.

Any Guns ‘n’ Roses fans out there? If you are a fan of this unforgettable band from the 1980s and 90s, then you will definitely recall the lead singer Axl Rose and his long and lustrous mane of gorgeous red hair.

Any word that is associated with fire would make sense as a male husky name. The word ‘Blaze’ is Latin for ‘fire’. In Old English, this word means ‘torch’, or ‘bright flame’. Today, the word is also associated with making a new path, or ‘blazing the trail’. This would make the name even more suitable for an intrepid husky who loves to explore nature.

This gorgeous Irish name comes from the Gaelic word for ‘son of the red warrior’. So if your red husky boy seems to have a brave nature, then perhaps this is the perfect name for your new puppy.

Clifford the Big Red Dog is one of the most beloved children’s stories of all time. Written by Norman Bridwell in 1963, it tells the story of a little girl who owns a red dog that is as big as a house and their adventures. Clifford is a big softy who loves his family. Does this sound like your dog?

History buffs will be familiar with Erik the Red, the Viking who founded the first settlement on Greenland in circa 985 C.E. Erik the Red was also the father of Leif Eriksson, who is supposed to have been the first European to reach North America. Erik, the Husky has a really nice ring to it, don’t you think?

Flynn is an Irish surname that has been gaining increasing popularity as a first name in recent years. This name means ‘reddish or ruddy complexion’. Others believe that this name means ‘son of the red-haired one. Either way, it is the perfect choice of husky name for a red male husky.

The word ‘fox’ is an obvious choice for any animal with a red coat. Foxes are beautiful and intelligent creatures, with the most remarkable and striking red fur. So if you have a male husky with a coat that is true red color, then ‘Fox’ would make a great name. We just hope that your dog does not grow up to be as wily and cunning as its namesake though!

Jasper is a gorgeous semi-precious gemstone that comes in all shades of red. It also makes for a super-cute husky name! Plus it was the name of the red-haired Welshman who was the great uncle of another famous redhead, King Henry VIII of England.

The phoenix was the legendary bird that rose from the ashes. So given this mythical creature’s association with fire, then it may perhaps take your fancy as a name for a red male husky. The planet Mars has many minerals in its soil, which oxidize and rust. This gives its surface and atmosphere a reddish appearance. So Mars would be a cool husky name for one with a reddish coat.

Radcliffe is an Old English word that means ‘from the red cliff.’ Harry Potter fans may like this name due to it being the surname of Daniel Radcliffe, who played Harry Potter in the film franchise.

Radley is an Old English word that means ‘red meadow’. Perhaps you and your husky boy may like to take a romp through the meadow together when he is old enough.

How about just good old-fashioned, plain ol’ Red as a red male husky name? It is short, sweet, easy for your dog to learn, and sounds cool to boot.

Rory is an Irish name that means ‘red king’. It was first made known in the 12th century via a king called Rory O’Connor. Rory O’Connor was the last native High King of Ireland, before the Anglo Saxon invasion.

Roth is a derivation of the German word for the color red, ‘rot’. The name Roth was used to describe a person with red hair, and also the red clay used in pottery. So if you yourself have German heritage, this name may be one that you could add to the family via your red husky boy!

Another cute Irish name that means ‘red-haired’, and perfect as a husky name. Saint Rowan was a sixth-century saint of Ireland. Not that anyone would ever expect a husky pup to be saintly of course!

Rusty is a popular and common nickname for people called Russell, and also for someone with ginger hair. So why not use it for your dog? It is also the name of the son in the National Lampoon’s Vacation films starring Chevy Chase, so if your dog is a funny boy then perhaps you might choose this name for him.

We have added this cool name to our list because of its obvious links to Valentines’ Day, and red love hearts! So if you have fallen in love with your little red bundle of fur, you could name him Valentino, or Val, for short. We are sure that he will grow up to be a heart-breaker!

This brings us to the end of our list of 20 names for a male red husky. We hope that in this list you have found the right name for your husky pup! What names would you add to this list? And please feel free to share our names list with anyone you know who is thinking of getting a red husky puppy, and in need of inspiration!